Recently there's been some media interest in our work on abuse toward politicians. We performed an analysis of abusive replies on Twitter sent to MPs and candidates in the months leading up to the 2015 and 2017 UK elections, disaggregated by gender, political party, year, and geographical area, amongst other things. We've posted about this previously, and there's also a more technical publication here. In this post, we wanted to highlight our interactive visualizations of the data, which were created by Mark Greenwood. The thumbnails below give a flavour of them, but click through to access the interactive versions.

Sunburst diagrams showing the raw number of abusive replies sent to MPs before the 2015 and 2017 elections. Rather than showing all candidates, these only show the MPs who were elected (i.e. the successful candidates). These nicely show the proportion of abusive replies sent to each party/gender combination but don't give any feeling per MP the proportion of replies which were abusive. Interactive version here!

An overlapping bar chart showing how the percentage of abuse received per party/gender by MPs has increased between 2015 and 2017. For each party/gender two bars are drawn. The height of the bar in the party colour represents the percentage of replies which were abusive in 2017. The height of the grey bar (drawn at the back) is the percentage of replies which were abusive in 2015 and the width shows the change in volume of abusive replies (i.e. the width is calculated by dividing the 2015 raw abusive reply count by that from 2017 to give a percentage which is then used to scale the width of the bar). So height shows change in proportion, width shows increase in volume. There is also a simple version of this graph which only shows the change in proportion (i.e. the widths of the two bars are the same). Original version here.

A map showing the geographical distribution of abusive replies. The map of the UK is divided into the NUTS 1 regions, and each region is coloured based on the percentage of abusive replies sent to MPs who represent that region. Data from both 2015 and 2017 can be displayed to see how the distribution of abuse has changed. Interactive version here!
Posted by Genevieve Gorrell at 16:13 No comments:

How difficult is it to understand my web pages? Using GATE to compute a complexity score for Web text.

The Web Science Summer School, which took place from 30 July - 4 August at the L3S Research Centre in Hannover, Germany, gave students a chance to learn about a number of tools and techniques related to web science. As part of this, team member Diana Maynard gave a keynote talk about applying text mining techniques to real-world applications such as sentiment and hate speech detection, and political social media analysis, followed by a 90 minute practical GATE tutorial where the students learnt to use ANNIE, TwitIE and sentiment analysis tools. The keynotes and tutorials throughout the week were complemented with group work, where the students were tasked with the question: “Can more meaningful indicators for text complexity be extracted from web pages ?”. Here follows the account of one student team, who in the space of only 4 hours, managed to use GATE to complete the task – an extremely creditable performance given their very brief exposure to GATE.

After some discussion, our team decided to focus on a very practical problem: the readability metrics commonly used to assess the difficulty of a text do not account for the target audience or the narrative context. We believed a simple approach employing GATE could offer greater insights into how to identify the relevant features associated with text complexity. Everyone had an intuitive understanding of text complexity; it was when trying to match these ideas into an objective framework that issues arose. Particular definitions on complexity, understandability, comprehensibility, and readability were mixed and matched when approaching this issue.

In our team vision, the complexity of a document is based not only on the structure of the sentences but also in the context of its narrative and the ease with which the targeted audience can understand it In our model, the complexity score of a text is linked to the context of the text’s narrative. This means texts about certain narrative contexts (topics) are inherently harder to understand than other texts. How hard it is to understand a particular text is also related to the capabilities of the reader. Thus, texts on specific narrative contexts can be characterized to create a score of how hard to understand they will be for certain audiences.

To do this, we proposed the following process:
During the allocated time, our team completed the first stage by creating an entity lexicon. We employed GATE to identify entities within a 11-webpage corpus.

The corpus was composed by 9 Wikipedia pages and 2 academic articles, and an independent scoring (1-10 scale) of the pages’ complexity was given by 4 team reviewers. Then, the entities were identified for each document by running the ANNIE and TermRaider plugins in the GATE GUI.


These entities were given a complexity score by computing the average complexity of the pages they appeared in. We obtained a set of 5312 entities which were exported to an xml file.

Once duplicates had been accounted for, our lexicon was composed of 906 weighted pairs.

This lexicon was used to calculate a complexity for a new page set, which showed significant divergence from the base (readability) score we were given at the start.

In general, the entities in a text are associated with the text narrative contexts, e.g. celebrity news will include celebrity names and places, while scientific literature will reference percentages, ratios and error estimates. In our model, an annotation of the complexity of a sample of pages from several narrative contexts could be used to determine a complexity value for relevant entities based on the complexity scores of the pages in which it appears, which can then be used to estimate complexity scores for new pages.

Given the time constrains we had, many of the activities were done based on naïve algorithms and within the limits of our resources. We have some further ideas on how this approach could be further explored. First, we believe that any complexity score should take into account the audience capability. In this case, the researcher should appreciate that determining the characteristics of the population they wish to explore is just as important as determining the narrative context and structure of the text. Asking teenagers to read mathematical formulae will yield different complexity scores from if the audience were GPs or older adults.

An objective way of scoring the complexity of a text is the use of comprehension testing process like CLOZE, where every 5th word is replaced with a blank space which respondents are asked to then fill. Such a procedure can be used in crowdsourcing platforms like Mechanical Turk to create complexity lexicons for specific audiences: sample texts of diverse narrative contexts (topics) would be selected to be assessed by the crowd, which would tell us in how complex particular groups of people find certain texts (e.g. UK teenagers find maths text really difficult and tweets easy, but the complexity scores may reverse for older Mexican maths professors when given the same texts).

Another aspect that could be easily improved is the use of centrality metrics like TextRank to determine which named entities are actually relevant to the text, based on their frequency and position within the narrative. Finally, a ranking algorithm like Page-Rank can be adapted to obtain the complexity scores of the entity lexicon in a way that permits to identify relevant entities by employing clustering algorithms.

Slides from the group presentation
Posted by Diana Maynard at 16:56 No comments:

Students use GATE and Twitter to drive Lego robots—again!

At the university's Headstart Summer School in July 2018, 42 secondary school students (age 16 and 17) from all over the UK (see below for maps) were taught to write Java programs to control Lego robots, using input from the robots (such as the sensor for detecting coloured marks on the floor) as well as operating the motors to move and turn.  The Department of Computer Science provided a Java library for driving the robots and taught the students to use it.

After they had successfully operated the robots, we ran a practical session on 10 and 11 July on "Controlling Robots with Tweets".  We presented a quick introduction to natural language processing (using computer programs to analyse human languages, such as English) and provided them with a bundle of software containing a version of the GATE Cloud Twitter Collector modified to run a special GATE application with a custom plugin to use the Java robot library to control the robots.

The bundle came with a simple "gazetteer" containing two lists of keywords:

and a basic JAPE grammar (set of rules) to make use of it.  JAPE is a specialized programming language used in GATE to match regular expressions over annotations in documents, such as the "Lookup" annotations created whenever the gazetteer finds a matching keyword in a document. (The annotations are similar to XML tags, except that GATE applications can create them as well as read them and they can overlap each other without restrictions.  Technically they form an annotation graph.) 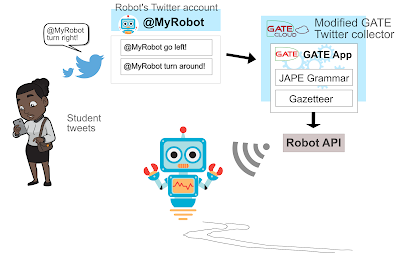 The sample rule we provided would match any keyword from the "turn" list followed by any keyword from the "left" list (with optional other words in between, so that "turn to port", "take a left", "turn left" all work the same way) and then run the code to turn the robot's right motor (making it turn left in place).

We showed them how to configure the Twitter Collector, follow their own accounts, and then run the collector with the sample GATE application.  Getting the system set up and working took a bit of work, but once the first few groups got their robot to move in response to a tweet, everyone cheered and quickly became more interested.  They then worked on extending the word lists and JAPE rules to cover a wider range of tweeted commands.

Some of the students had also developed interesting Java code the previous day, which they wanted to incorporate into the Twitter-controlled system.  We helped these students add their code to their own copies of the GATE plugin and re-load it so the JAPE rules could call their procedures.

We first ran this project in the Headstart course in July 2017; we made improvements for this year and it was a success again, so we plan to include it in Headstart 2019 too. 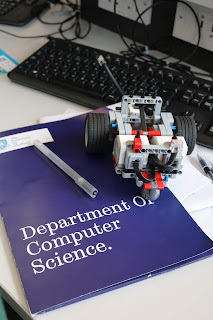 The following maps show where all the students and the female students came from. 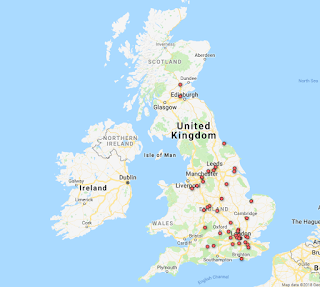 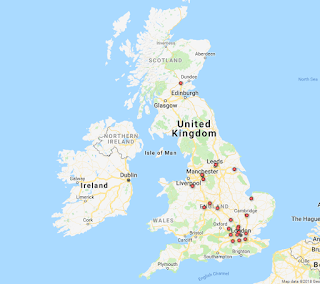 This work is supported by the European Union's Horizon 2020 project SoBigData (grant agreement no. 654024).  Thanks to Genevieve Gorrell for the diagram illustrating how the system works.